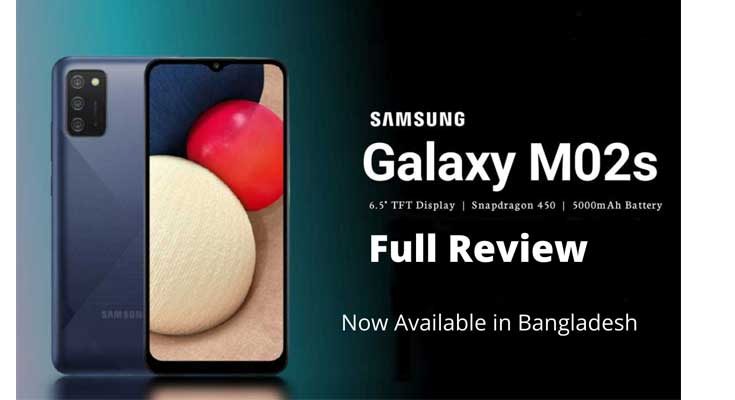 In 2020, Xiaomi and Realme dominated the budget segment and Samsung’s M Series was too far off. So the company had to do something, something really quick as a result. The first phone that Samsung brought out in 2021.

Is this one right here the Samsung Galaxy M02s. It costs one thousand more than its competition the Poco C3 and in this Review, I will be discussing whether the Galaxy M02s is worth the extra cash or should you stick with the trustee Poco C3 instead.

Let’s start with the packaging Shall we, even though the M02s supports 15 watts fast charging Samsung only ships a 7 point 8-watt break Inside the Box. Looking at the two phones side-by-side.

I’m personally fond of the design Aesthetics or the M02s over the Poco C3, it feels slightly more ergonomic on my hand and the texture on the rear panel offers a decent grip as well. And those who are looking for a bold design You’ll definitely find this red color variant more appealing if you want something more subtle. So you can go for the black or the blue option regardless this dual-tone finish looks quite attractive and despite having a plastic build. It does not scratch easily. So I felt confident enough to skip a back cover on this phone. The camera lenses do not protrude as much either. So that’s great.

Overall. I think budget phones have come a long way in the past couple of years and even inexpensive phones these days offer good design and build quality.

Just compare it to Samsung’s J series of folds from the past. There’s a vast Improvement in the design language in Today’s budget phones.

Okay, moving onto the display. There isn’t much of a difference between the quality of the panel between these devices.

Both phones feature is 6.5 inch LCD screen with an HD Plus resolution and a 20:9 aspect ratio.

Not just the specs the actual quality of these greens does not vary that much either the color reproduction viewing angles and brightness levels are almost the same in these phones.

However, the Poco C3 does take an edge with its pane glass protection.

Whereas the M02s do not come with an Any still I would advise you to put on a decent tempered glass on both the phones for prolonged durability on the performance side of things surprisingly.

There’s not much of a difference between the Poco C3 and the Samsung Galaxy M02s in theory the Helio G35 on the former with its overclocked cortex a53 of course should have delivered noticeable superiority in performance against almost three years old Snapdragon 450.

Even The Benchmark will push the same story, but in everyday usage, I could not notice much of a difference. The UI feels slightly faster because of the animations on Poco C3 other than that both the M02s and the Poco C3 have similar performance in my gaming test though. I totally did not expect the M02s to perform better. For example, playing PUBG Mobile under balance graphics and medium frame rates. The gameplay was choppy on the Poco C3 but the M02s unexpectedly delivered a smooth gaming experience. Moreover, you can even play the game at a high frame rate and smooth graphics on the M02s. So seeing. Samsung optimizes its budget devices for better gameplay is quite commendable likewise Call of Duty Mobile Fields optimized as well on the M02s. Under medium Graphics settings and Max frame rates. There’s no noticeable lag or frame job.

Thankfully this Qualcomm silicon does not heat as much either after an hour or more continuous gaming this plastic bag does get slightly warm, but that’s not much of an issue.

Okay, let’s move on to the cameras now, here as well. Both phones share the exact same lens setup are just like the Poco C3 the Samsung Galaxy M02s also feature a gimmicky triple camera system barring the 13-Megapixel primary sensor the remaining 2 Megapixels macro and depth lenses are pretty much useless. Comparing the images from the 13 megapixel primary and the 5-megapixel selfie shooter of the two firms. I found that the images from the Poco C3 to be slightly better, especially when it comes to Portrait shots and selfies.

The difference in image quality is not that fast though and in some instances, the M02s take batter photos. In terms of videos.

Well, we can’t expect anything extraordinary from these phones the M02s can take 1080p 30fps footage from both front and back cameras just like the Poco C3 however, as expected it lacks any sort of civilization and the details that exposure maintenance is pretty hopeless to so if you want considerably better camera performance, I would suggest you invest two to three thousand Taka more and get the Moto G9 Play or the Poco M2 which are much better camera phones.

As for the battery like in most other aspects, the Poco C3 and the Galaxy M02s are powered by a similar size 5000 mAh battery.

Its endurance is pretty good. Like the Poco C3 and easily gives a DS battery life. The Galaxy M02 does have an upper hand in this category since it features a USB type-c connection contrary to the micro USB port on the Poco C3, what’s more, is that the M02s. Even supposed 15-watt fast charging while most of the other budget phones are restricted to Ted was charging only. So I highly recommend you get a 15-watt fast charger along with the Galaxy M02s since the 7.8-watt power adapter inside the Box juices of the phone pretty slowly.

So let’s wrap it all up truth be told Samsung’s budget phones of 2020 were pretty miserable and we had mentioned that in our review of the Galaxy M11 and the Galaxy M01 S.

However, with the M02s. It feels like the company is trying to rectify its errors of the past all in all just like other budget phones like the Poco C3 and the Realme C12 the Galaxy M02s is a decent entry in the market as well plus with the added edge of Samsung over companies like Realme and Xiaomi, in terms of its availability and after-sales Services, I feel like many people will favor the Galaxy M02s over its competition.

So that was all for our Review, Samsung’s latest budget offering the Samsung Galaxy M02s, which is your favorite budget for this year is in the Poco C3, The Realme C12, or the Galaxy M02s to let us know in the comments below.