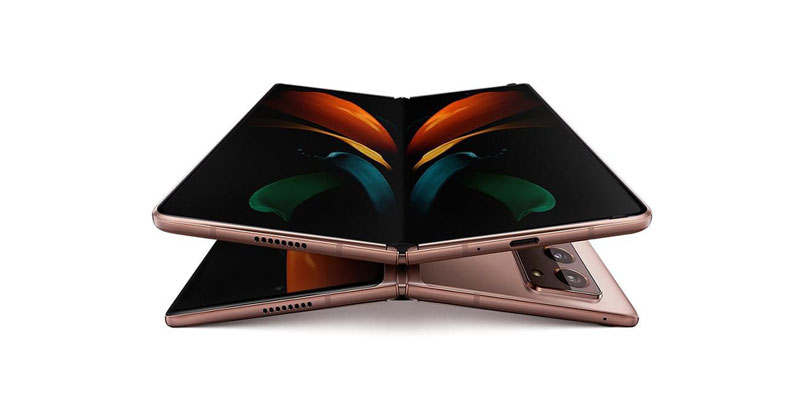 Hey, guys Today I will share with you the Samsung Galaxy Z Fold 2 5G Review. As regular smartphones continue to get more and more difficult to get excited by foldable seem to be the next big thing companies like Samsung, Huawei, and even others have already found success in the foldable industry and the only Samsung Galaxy Z Fold 2 5G to establish itself as the sole tenant of the Ivory Tower the most premium and luxury smartphone money can buy Z Fold 2 is officially the third generation foldable phone from the company addressing the drawbacks of the original fold. It is Samsung’s Testament and the proof of its commitment to the future of smartphone design.

If you recall the first-generation Galaxy fold was indeed groundbreaking but it also had a dismissible cover display Film Z unreliable hinge and off-putting notched main display all of which have been re-engineered for the better this time around the most noticeable and necessary Improvement can be seen on the metal cover. Hinge calls The Hideaway to hinge the Galaxy Z fold 2 is incredibly sturdy using a cam mechanism the phone can stay open on various angles while being able to stand on its own between 75 and hundred fifteen degrees Samsung makes use of this hinges stability into a feature called Flex mode, which is very appropriately named if you ask me under this the large main display is divided into two separate but uniform areas letting you use an app in a whole new way disappointingly very few apps make use of the flex mode for now besides camera are the native apps like calendar clock calculator Gallery Samsung Notes and a handful of third-party apps like Google to and YouTube conform to the flex mode moving on. The hinge is fortified by small elastic brushes to prevent dust and other unwelcome particles from getting inside.

As far as I can say, my unit of the Z Fold 2 does not seem to have let in any amount of dirt or other undesirable nanoparticles, but that is not a hundred percent warranted considering how Z Fold 2 lacks any kinds of Ingress Protection add to 82 grams the foal to is definitely not lightweight holding a phone like you would hold the tablet Fields lavish and surprisingly futuristic when you get to folding the device, there’s a satisfying clack while the two plastic nubbins on the top and the bottom edge of the main displaced bezel absorb the pressure of the fold and ensure the protection of the displays talking about folding. The Fold 2 Samsung is yet to achieve a gapless hinge like on Motorola’s new razor 5G.

Anyway, it is a thick boy and therefore obviously feels like you’re holding two phones at plants or a bar of gold. However, you like to describe it likewise the Z Fold 2 has a metal frame Gorilla Glass 6 back whereas the cover display is be enforced by Gorilla Glass Victus.

Despite all this, I cannot speak for the absolute durability of the fold because of all the intricate engineering inside once we have dropped and it could be game over for the full to hear the right frame of the device. Is the volume rockers and a side key that doubles as a fingerprint sensor to the top and bottom left frame hold the stereo speaker setup, which can get really loud plus a fair bit of details to enjoy.

Okay, let’s talk about the display now and as I mentioned earlier the biggest complaint about the original fold was, its unappealing cover display ad just four-point six inches getting things done on the go on it was an uninspiring Journey.

Well, Samsung has heard that complaint loud and clear and therefore the Z Fold 2 discovered display is a six-point two inches edge-to-edge AMOLED screen that can pass as a usable regular smartphone display for making calls using navigational apps and more the cover display has got you covered one-handed typing is also a lot more comfortable on this screen, which is a direct reflection of its narrow aspect ratio, technically with its 2260 x 816-pixel count plus an aspect ratio of 25.9. It is an HD+ panel.

But make no mistake. It is incredibly sharp. And I don’t think I need to talk about the quality of a Samsung display here when unfolded you’re greeted with a large 7.6 inches Dynamic AMOLED display enough to make a grown-up geek out.

Anyhow, this display uses Samsung’s ultra-thin glass layer that debuted on the Galaxy SIII flip and Samsung has had to implement multiple layers of different materials to achieve foldability usability and durability screen it Goes AMOLED panel UTG, protective layer, and a factory-applied screen protector.

You can tell the difference between the physical quality of the cover and the display right away as this one feels much more plastic, but I have to say that over time. I got pretty used to it moreover the camera bezel on the first fold is now replaced with a minimalistic.

Moncho cut out. It houses a 10-megapixel selfie camera just like the one on the cover display and I’m guessing it’s to maintain symmetry between the two screens the identical camera sensors are placed in an alignment, but I think Samsung could have done a better job at this because the diameter of the cutout on the main display is relatively larger than the one on the front moving on the Z Fold 2 is vivid 7.6 inches screen also enjoys up to 120 hertz of adaptive refresh rate using an LTP black paint, the screen automatically switches between 11 Hertz and all the way up to 120 hertz depending on the content now allow me to address the elephant in the room decrease. Yes, it’s there. And yes, it could be distracting but hold on the crease sort of just disappears when looking at it upright with the device folded to 180 degrees.

Even when interacting with a bright background. I could not notice it anyway besides using regular apps playing games on the Z Fold 2’s big screen is an awesome experience.

But because of its unusual form factor, most games haven’t been optimized properly and one could notice the loss in graphics quality if you really look for it.

You’re in PUBG mobile even with the highest graphic settings turned on the rendering of the textures. Look way to Jaggi which is natural considering the phone’s top-of-the-line silicon.

That being said you can crank up to their Max settings without any Hiccup and the largest screen real estate makes all the difference in your gameplay.

Like Z Fold 2 to does not heat up that bad either and just like on the cover display watching videos on the big main display is also greeted with a giant letterbox interestingly selecting. The see more content at the same time option under the display settings gives a more unless tablet-like viewing experience.

I actually prefer this option even though Samsung disables it by default.

Now, this does not work with all the apps, but where it does it’s a game-changer for instance apps like Gmail my files YouTube etcetera can get a lot more productive under this talking of productivity the galaxies Z Fold 2 also lets you do more advanced on this big screen. You can simultaneously Use up to three apps on the main screen and easily switch between them as you see fit as well.

What’s more is that you can even group the ones you frequently use into a shortcut and launch them all at once from The Edge Panel App continuity is another impressive feature on the Z Fold 2 with this app seamlessly stay open on the cover screen when folding the phone once again not all apps are privy to this luxury though on the reverse transferring apps from the cover to the main display is also Half Baked and did not work as As Nice in some games I tried besides this practically every app I use on my regular phone worked perfectly fine on the Z Fold 2’s main display apps don’t crash or misbehave on its new foldable form factor with a typical 22.5 is to 18 aspect ratio, which is a relief powered by the flagship Snapdragon. It’s 865+ the Galaxy Z Fold 2 is an absolute beast of a performer as well with 12 GB of high-speed LPDDR5 RAM and 256 GB of the user. UFS 3.1 storage on board.

Everything is as smooth as smooth can get thankfully. The Galaxy Z Fold 2 ships with the 5 G ready Snapdragon865 plus wherever available and there is no eggs Enos variant. Maybe that’s a production limitation to seeing how niche of a product it is because of all these everything works as perfectly fine as you’d expect from a flagship smartphone.

Okay, moving onto the cameras as I mentioned earlier the Z Fold 2 has a couple of 10-megapixel selfie Shooters on the cover and on the main display similarly, you can find a trio of 12-megapixel lenses at the back one for wide-angle one for Ultra wide-angle, and one for the telephoto shots right off the bat. This is not Samsung’s most impressive camera set up on a phone that Crown goes to the not 20 Ultra for now from 8K recording 250 times hybrid Zoom. Such headlining features have been dropped on the fold to in its own right the images from its cameras. I am adequately fine.

Don’t get me wrong, but it’s just that Pale in comparison to Samsung’s other Flagship phones here. You can shoot stabilized videos up to 4K 60fps and it’s telephoto lens does have a modest 2 times Optical and ten times digital Zoom images from the primary sensor have plenty of details and dynamic range is fine as well wide-angle shots share the same story, but the colors do tend to look extra Punchy and vibrant selfies from either of the 10-megapixel sensors. Look nice too. Although there is a slight reddish tint on the subject, however, you can take selfies from the objectively superior camera setup whose images don’t have that same red tint furthermore. The Z Fold 2’s covered display can also be fashioned into a live preview screen where you can show the subject of how the photo or video is turning out.

There is also this video recording feature called Auto framing where the camera adjusts the focus and zoom depending on the number of human subjects in the frame.

Getting to the battery now Samsung has managed to include a decent 4500 media mAh sell on the Fold 2. With the Adaptive refresh rate turn on and using the main display for 90% of the time. I managed to net out a day’s battery life almost every day which converts to some five to six hours of screen on time juicing of the phone is fairly fast as it supports 25 watts wired as well as 11-watt wireless charging

All in all, you’ve got to admit that the Z Fold 2 is the face of the future of smartphone designs being able to unfold a phone into a mini-tablet is truly remarkable and Samsung’s efforts to make the phone feel as natural as possible is commendable having said that there are still a lot of factors that go against the Z Fold 2 consider it as a viable product and not just as an item of luxury no matter how you spin it to grams is still an insane amount of money for a smartphone and you guessed it. It is definitely not worth purchasing for mainstream audiences from its bulky design to the relative delicacy. It is hard to recommend this phone to anyone button enthusiasts still if you want to buy the most lavish and Futuristic smartphone money can buy it does not get better than the Z Fold 2 at least for now.