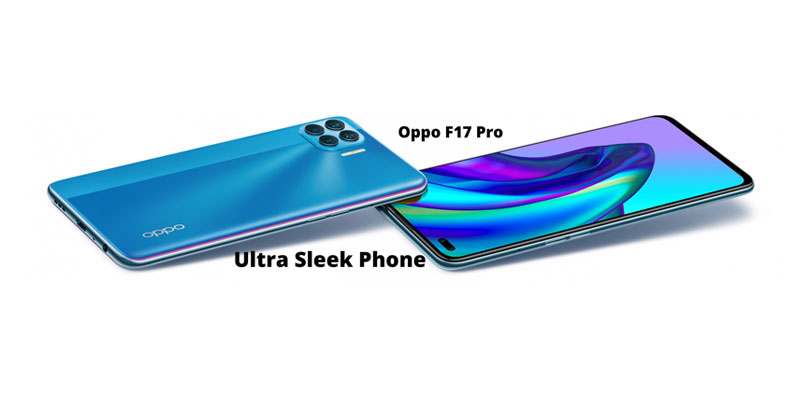 Introduce Oppo F17 Pro Review, Although Oppo boasts some of the most impressive Flagship phones. The industry has to offer the company has historically managed to establish itself as a brand that values the trend the Glamour and more importantly, the cameras above everything else the new Oppo F17 Pro that I have with me right now follows the same Trend dubbed as the slimmest and lightest entry in Oppo’s fashion first F series of smartphones the Oppo F17 Pro is definitely something to drool over but how’s everything else on this phone? Let’s find out.

Like its predecessor, the F17 pro stands Out Among the competition because of its design. Like I said earlier Oppo is advertising this phone to be the sleekest phone of the Year measuring just 7.488 millimeters in thickness while weighing 165 grams the phone almost feels non-existent when keeping it in the pocket Oppo has achieved this impressive lightweight built partly because of the use of a polycarbonate back alongside the plastic frames.

This may sound like a bummer too many but trust me it’s really not considering how much work Oppo has put in designing the back panel with a subtle reflective matte finish holding the phone at different angles make it seem as if the camera module is pouring rays of light throughout the panel.

There’s also a vertical strip running down the length of the phone, therefore, resulting in a hip dual-tone design.

Unfortunately, the phone is not as fingerprint resistant as oppo would want you to believe also the camera module itself has a dual-layered finish with the actual sensors. Shooting even further and I also noticed dust accumulation around the camera module there for masking off the glassy surface beneath it overall despite the shortcomings. The design of the Oppo F17 Pro is definitely one of the things that you would like now moving on to the display Oppo f17 Pro Sports a 6.43 inches FHD+ AMOLED panel refreshing at regular 60 hertz with a dual punch hole cut out for the selfie cameras and like every other typical AMOLED panel you get to enjoy a rich color with excellent contrast on the display, it can get plenty bright to even though you’re under direct sunlight oppo also claims that the phone can reach up to 800 needs of brightness likewise. The company has also added dark mode and always-on display features or the F17 Pro both of which were absent on the Oppo F15 dark mode on the Oppo F17 Pro is still better and therefore does not work. Well with all the apps, whereas you get to play around with up to 18 different clock Styles and the information to show under the always-on display settings.

Powering the Oppo F17 Pro is a Mediatek Helio P95 chipset, which is definitely an improvement over The Helio p70 that was there on the Oppo F15 on my usage. I face no problem with the phone as it was fairly capable of handling my everyday tasks with 8 GB of RAM onboard multitasking was a breeze as well now getting to gaming I was able to get around 25 to 30 FPS in PUBG Mobile under HD graphics and extreme frame rates.

The FPS data comes directly from the built-in game Assisted feature, there are hardly any instances of stutter or noticeable lag.

But as with most of the MediaTek chipsets, the phone does start to heat up pretty quickly.

Therefore naturally if you want a stable and comfortable gaming experience on the f17 pro you will need to turn down the frame rates to ultra or high similarly. I tried playing Call of Duty Mobile in both graphics and the frame rate set too high here.

The gameplay was fairly decent with a minus starter’s every now and then but nothing that concerning overall the performance on the Oppo F17 Pro is surprisingly good still if you look at the competition like the Realme 7 Pro or the Vivo v20, they are offering slightly better Snapdragon 720G chipset, but still don’t get me wrong The Helio P95 is not as bad as I initially thought as for software. It runs on Color OS 7.2 based on Android 10 and is currently now on the November security patch.

Oppo also has a very good track record of providing security updates and they are gradually improving its OS as well. Obviously, it’s not When you’re the best but I liked the way Oppo F17 Pro ships with Google Phone and messaging apps as the default instead of their Oppo Alternatives even swiping rights on the home screen takes you to the Google discover feed.

If memory serves me, right? This space was sheltered by some kind of assistant life feature from the company itself other interesting features on the color AI 7.2 include Oppo lab and oppo relaxed as the name implies. The former is home to a set of new experimental features at the time of writing this Oppo F17 Pro Review there were nine assorted features inside it and I am personally fond of how it lets you change the icon shapes and such similarly the icon pull gesture makes it easy to use the phone single hand.

It in terms of cameras the Oppo F17 Pro ships with a total of six cameras at the back and two at the front the rest setup includes a 48-megapixel primary sensor followed by an 8 Megapixel wide-angle and 2-megapixel monochrome senses, the Dual punch hole cut out on the display houses a 16-megapixel sensor. And an additional 2-megapixel depth sensor in the process of reviewing F17 Pros cameras.

I compared it against the Realme 7 Pro as both of these devices retail for a similar price here in normal images the shots from the f17 pretend to feature this noticeable pinkish tint to them while the ones from the Realme 7 Pro has more of a yellow tone. The dynamic range is also comparatively worse on the f17 pro as you can see from these samples.

The one from Realme has better details and highlights, but in a couple of instances, the Realme 7 Pro does overcompensate Shadow details and exposure moving on to the wide-angle images the photos from the Realme 7 Pro are much more detailed and have better exposure and white balance maintenance while the results are fairly comparable in dimly-lit situation the inferiority in Oppo F17 Pros wide-angle sensor is highlighted in a sunny environment portrait images look slightly better on the F17 Pro as the ones from the Realme 7 Pro have overblown shadows and exposure.

The Edge detection itself is very similar between the two phones though, although the subjects do look a bit smooth and on Oppo, the yellowish hue is the Realme 7 Pro looks almost cartoonish.

Okay, regular selfies on the F17 Pro look pale while the ones on the competition come of reddish and maybe even over sharpened here as well the subject look smooth, and on the F17 Pro portrait selfie share a similar story while a background exposure is much worse on the Realme 7 Pro.

All right when it comes to nighttime Shots both the fourth struggle by quite a bit order extremely poor lit environment the regular nighttime images on the f17 pro are a little grainy. Whereas Realme 7 Pro has slightly Punchy colors.

It also has better exposure and Shadow details compared to the f17 pro and therefore looks better with a good amount of detail turning on night mode images from both. The phones have similar results. Although I would prefer the one on the Realme 7 Pro for its marginally better details regular wide-angle nighttime shots from both the phones are almost dismissable.

although night mode does help a bit to bring out more details in terms of videos. The F17 Pro is locked at 30fps under every resolution 1080p 30fps footage is from the f17 pro look a bit muddy and it cannot log exposure as often.

But otherwise, they are similar on both phones in regards to details and stabilization bumping the resolution to 4K the Realme 7 Pro gives off stabilized shots while Oppo lacks it entirely similarly 1080p 30fps. Wide-angle videos are slightly wobbly on the Epsom it impro although the Realme 7 Pros field of view is comparatively smaller. Selfie videos are not that great on the Realme 7 Pro with worse background exposure and a shorter field of view.

Oppo F17 Pro Review For battery, You get a decent 4015 milliampere cell, which I think is a bit smaller considering what the competing devices have to offer almost every day. I had to charge the phone in the evening after two hours of first-person shooter gaming and a couple of hours of social media browsing video streaming and Touch the considerably inadequate battery endurance is somewhat compensated by the 30-watt poop flash charge 4.0 and it can juice up the phone and just 55 minutes.

Now, we all know by now that fast charging technology is has an adverse effect on battery health in the long run. So to prevent that oppo has come up with a technology called AI night charging with this the device intelligently identifies the time of the day when you’re most unlikely to use your phone and then slows down the charging process in that period.

Additionally. It also has an excellent AMOLED panel and the viewing experience is great, too.

Unfortunately, the camera performance on the Oppo F17 Pro is somewhat inconsistent as we discovered from our intensive testing against the directly competing Realme 7 Pro. About that Realme superiority is kind of Fusing considering how it’s supposed to be a spin-off of Oppo itself. Just by looking at the spec sheet. You can tell how the Realme 7 Pro is a much better value overall from relatively better cameras to bigger battery to better performance and a flagship great. 65-watt fast charging.

Everything is better on the Realme 7 Pro compared to the Oppo F17 Pro and if you want even better cameras, we cannot recommend the Vivo V20 enough, although it comes for a slightly higher asking price.