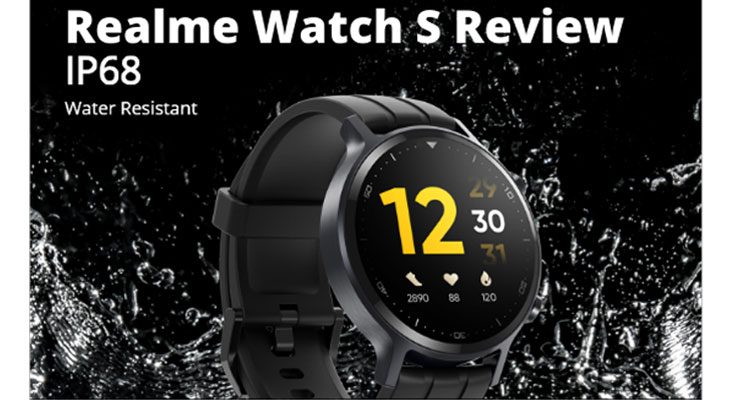 Hey guys, Today I will share with you Realme Watch S Review, So Realme recently launched two Smart Watches the Realme Watch S and the Watch S Pro. And the one I have with me right now is the Realme Watch S which is the cheaper of the two well looking at the specs this one definitely seems like an upgrade from the last-gen Realme watch both in terms of looks and functionalities.

So having used it for around two weeks. Now, I am going to be sharing with you all my experiences with it in this Review.

Okay coming from the Realme Watch the Realme Watch S is a big Improvement in terms of its design you get a circular form factor with a watch dial at the top that does not rotate obviously, but unlike the plastic material on the realme watch. This one has an aluminum alloy finish which does not feel cheap. The TPU strap is soft. And comfortable and it’s available in a couple of color options sadly for me. I have this black one and there aren’t other color variations available in Bangladesh but in markets like Europe, other colorful straps will be available shortly as well.

Anyway, you get two buttons on the right side of the Realme Watch S the top one functions as a home / back button and also launches the menu screen while the one at the bottom is a shortcut to the exercise menu and I like the fact that these buttons have fairly good feedback is especially coming from the Realme watch similarly compared to the music to 40 by 240 pixels of its predecessor the watch s has a one-point three inches LCD screen with a 360 x 360-pixel count making for a sharper and a more pleasant display to look at the contents. Do not look pixelated here and the colors look really good too.

It’s not as good as the AMOLED screen on the Watch S Pro, but good enough for the price to say at the least.

The company has also improved on the brightness aspect and added an auto-brightness feature here, which Which is great likewise, the number of available built-in watch faces has increased and I have to say that some of the options are really appealing likewise. You also have the option to customize your own watch face if you’d like, but one thing that still bugs me is how the screen response is still a bit slow. It’s not annoyingly slow, but it takes some time to register your touch.

Maybe it’s because of the entry-level chipset or it is a software thing, but I hope that the company can overcome that in the future now functionality-wise the watch s Still is a simple and basic Smartwatch like its predecessor.

So operating it is really really easy swiping down from the home screen takes you to the notifications while swiping up from the bottom opens up the shortcut for all the functions likewise swiping left or right from the home screen takes you to the quick toggle menu and helps that’s all right now general information aside this time Realme has added a few more options for exercise and now there are 16 in total. I am not that big of a fitness freak. So I only have tested a few of the exercises like walking. Walking running skipping which I do on a daily basis.

But other than that, you can track quite a lot of things including basketball football aerobics meditation breathing Etc.

And by the way, just like a purse with the real me watch all your exercise stats can be viewed on your Realme link app. The app is basically the same as before and I am a little disappointed that this generation of Realme. What still does not have IOS compatibility.

Thus I had to pair it with my Samsung phone, which I have been using as my secondary device, but seeing how More premium watches Pro supports iOS platform.

I am hopeful that the standard watch is will see apple compatibility in the coming days now talking about the app itself. It’s a basic one and nothing extra. You can view all your health stats on the homepage itself while all the other settings like reminders notifications watch faces Etc can be accessed by going to the settings option that is available on the top right of the app to adequately differentiate between the Realme Watch S and the Watch S Pro the company has not included and in inbuilt GPS on this watch. So if you wish to track your Trails or your exercises, you will have to use your phone’s GPS now about other health-related features. Well, it is the same as before you get a heart rate monitor a step and calorie counter sleep tracker, and spo2 monitor now like always I compare these functions with the Galaxy watch active to and found that the sleep tracking and step counting are pretty accurate while I got slight variations in the blood oxygen data and heart rate stats the difference. However, Is not that huge so it should not be that big of a deal I guess moving on just like its predecessor. You don’t get a microphone in here still the most you can do is dismiss calls from this watch also the notifications that appear here are non-actionable, but that is to be expected. I guess also the watch else does not support automatic detection of exercises like it is with other high-end SmartWatches and you will have to do it manually in here which is always a bit less Canadians.

Okay among everything else. This was certainly impressive. With its battery life. It’s 390 million power cell is very very promising the company advertisers saying that it can last full 15 days with the heart rate monitor turned on in my usage. It lasted me for 12 days with all my fitness and health tracking which is still fantastic.

By the way. I have enabled the heart rate monitoring option to run every five minutes and I always use the watch in the fourth level of brightness.

Okay charging the Realme Watch S is possible with this magnetic to pin circular charger and it takes more than two hours to juice up fully all in all I have to say that the Realme Watch S is a very good budget Fitness tracking option and definitely an upgrade over the last generation Realme Watch although the upgrades are not a very big magnitude but my concern regarding this place pixelation and the design have been addressed as a result. I am very happy with what we’ve got here.

Having said that I still wish for the Realme link app to be available on iOS devices all the while being a little more feature back as well.

Also, maybe Realme good Focus a little more on Core Fitness tracking by maybe providing an automatic workout detection option or such so that was all for our Realme Watch S Review of the newly launched Realme Watch S what do you think about this product to let us know in the comments below.